What Happened to the U.S. Manufacturing Industry?

What Happened in Tulsa

It wasn’t taught in my classes in high school or college.

It wasn’t in the history books either.

But it sure seems like it should have been.

On the night of May 31, 1921, one of the worst racial attacks in U.S. history began on the streets of Tulsa, Oklahoma.

When the Tulsa Race Massacre finally ended 18 hours later, as many as 300 people had been killed, more than 1,200 homes had been torched and 35 city blocks had been destroyed in the city’s most prominent Black neighborhood.

Here’s how it went down.

In the first few years after World War One, racial tensions rose in many parts of the country. Part of the reason was that many of the 380,000 Black soldiers who fought in the war felt justified when they returned home in asking for better lives and more civil rights.

A series of clashes occurred in cities. The middle months of 1919, in fact, were known as The Red Summer due to the 25 riots, 97 recorded lynchings and numerous confrontations that happened between April and November.

The discord fueled a resurgence of the Ku Klux Klan that lasted for almost a decade.

All these elements were bubbling in 1921 in Tulsa, a city of 100,000 that was experiencing a booming economy due to the discovery of oil in Oklahoma.

However, Tulsa at that time had a high crime rate and was a severely segregated city.

Most of the city’s 10,000 Black residents lived in the Greenwood neighborhood. The thriving business district there was known as Black Wall Street. Historians say many white residents of Tulsa were jealous and angry over the success of these African-American entrepreneurs.

On May 30, 1921, a 19-year-old Black man named Dick Rowland was arrested and accused of sexually assaulting a white female elevator operator in the Drexel Building downtown. That building was one of the few in downtown Tulsa that had a restroom that Black people could use. It was on the top floor, so an elevator ride was necessary.

The next day, after word of the arrest circulated, a group of about 1,500 white men were met by 75 armed Black citizens outside the courthouse where Rowland was being held.

Some shots were fired and the outnumbered Black residents returned to the Greenwood neighborhood.

As morning broke on June 1, thousands of white citizens poured into Greenwood, looting and burning homes and businesses in a 35-block area. There are reports that Tulsa’s police chief deputized many of the white marauders and ordered gun shops to arm them.

Eyewitnesses reported that Black men, women and children fled into the darkness of the night to avoid being killed.

The National Guard was called in and they quelled the disturbance at about noon. They apprehended about 6,000 Black citizens and detained them at the local fairgrounds.
By then, eyewitness accounts say, Black Wall Street had been burned to the ground and the bodies of dead African-Americans lay in the streets.

A grand jury initially blamed the incident on Greenwood’s Black residents. No one was ever arrested for the crimes committed that evening.

Oklahoma authorities officially recorded 36 deaths. A 2001 state commission confirmed the 36 deaths, 26 of whom were Black.

However, historians say the death toll could have been as high as 300.

Some survivors recounted that bodies were dumped from bridges into the Arkansas River while others were tossed into mass graves to cover up the murders.

Given the horror of this massacre, why has this incident received so little historical attention?

For starters, historians say, Tulsa engaged in a deep cover-up.

The Tulsa Tribune, for example, removed its May 31 front page story on the riots from its bound volumes.

The police and state militia archives about the incident mysteriously disappeared.

White citizens certainly weren’t eager to talk about it.

Black residents of Greenwood preferred to forgot about the massacre. Some were afraid to bring it up. Members of the Vernon AME Church, which was burned to the ground that night, told “60 Minutes” in June 2020 that their parents and grandparents were reluctant to discuss the incident for fear of retribution.

In addition, schools didn’t teach children about the race riot.

So, the racial attack slowly receded into the past until 1996 when some scholars intrigued by a 75th anniversary memorial held in Greenwood began to dig into the past. 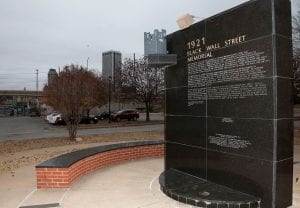 A memorial at the site of the 1921 race massacre in Tulsa, Oklahoma. Photo by Sue Ogrocki/AP/Shutterstock (9913767a)

In December 2019, archaeologists announced they had discovered what might be a mass grave from that night of mayhem. That site has yet to be exhumed.

In February 2020, Oklahoma leaders announced that the state would require that the 1921 Tulsa massacre be part of the curriculum of all schools.

The 100th anniversary of the Tulsa Race Massacre will occur on May 31.

There is a Black Wall Street Memorial at the Greenwood Cultural Center.

Metal plaques on the sidewalks mark where businesses used to stand before they were burned down.

However, Black community leaders told “60 Minutes” that Tulsa remains a segregated city. They note that there are railroad tracks that still divide the white side of Tulsa from the Black side.

The once prominent area of Black Wall Street now consists of a row of red brick storefronts, a minor league baseball park and an elevated highway built through this part of town decades ago.

The Oklahoma Eagle, the black-owned weekly newspaper in Tulsa, is trying to make sure people remember what happened on that evening 100 years ago.

On most Thursdays, the newspaper publishes stories, columns and photographs about the 1921 Tulsa massacre.

James Goodwin Is the paper’s publisher. His father, E. L. Goodwin, bought the weekly paper in 1936 and oversaw it until he retired in the 1970s. The night of the attacks was supposed to be prom night for E. L. Goodwin and his fellow high school students. That dance never took place.